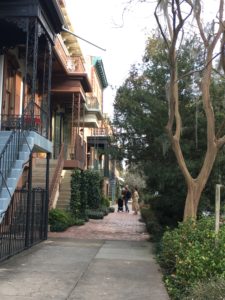 This year’s Qualitative Research conference was held in Savannah, Georgia, known for, among many other things, being a 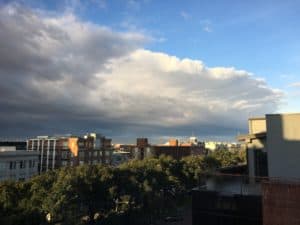 picturesque city filled with history and beauty.  It was all that, and more.  The title of the 2019 conference was “Charting Your Best Course,” offering sessions that centered across themes related to methodology, business building, refreshing conventional approaches, learning new technologies, and hearing the latest from thought leaders — in an all-too-quick 3-day whirlwind experience.

The keynote address, “The Neuroscience of Memorable Messages,” was engaging, funny, enlightening, and practical. Given how challenging it is to get listeners’ attention in the 21st century, the keynote speaker, cognitive neuroscientist Carmen Simon, discussed how important it is (and how) to craft messages that will be remembered amid a slew of others competing for audience attention.

There were several standouts in the breakout sessions.  One was a practical session by Kayte Hamilton about writing proposals to win business and eliminate bad habits that get in the way. Another was Allison Rak’s session on hacks and techniques to scale your business. This one contained a surprise crowd pleaser when the speaker demonstrated a particular hack called Plickers — an assessment tool used in the education field that “magically” surveys a group of people and provides instant answers by scanning answer cards the students (or respondents) hold up.  Kate Watson’s session on how to fit massive client expectations into a viable result and deliverable also was invaluable in terms of its sheer practicality. Finally, an illuminating session was one on cross-cultural representation in research by Zebra Strategies‘ Denene Rodney and Sharon Arthur.  This session highlighted the need for being “curious but not judgmental” when listening to target audience members from all backgrounds.

Every QRCA conference provides a little bit of choice tyranny, in the sense that there are so many good topics to choose from and sessions to attend that it is near impossible to get everything in a single go. Fortunately, they are recorded for download at a later time. As always, there was the Collegiality factor (making new friends and colleagues, reconnecting with old ones), the Exploration factor (dining in local restaurants, sampling local cuisine), and the Fun factor (winning a vendor giveaway, like I did for the first time ever!).

Then, there was the added benefit of being in a city that’s known to be one of the most haunted cities in America. I stole away for a brief tour of the “Ghosts and Gravestones” of Savannah one evening, which I highly recommend to anyone planning to visit. The night-time trolley tour took us to a haunted mansion owned by Andrew Low and the Perkins & Sons ship chandlery, described as a general store for ship workers.

And while I didn’t make it to the famous Bonaventure Cemetery (famously pictured on the cover of the esteemed book Midnight in the Garden of Good and Evil), I did walk to one more geographically convenient — the 1750 Colonial Park Cemetery.

Oak trees covered in Spanish Moss surround and weave through the grounds of the cemetery, which has gravestones of many notable historical figures, including soldiers from the Revolutionary War.

It was a memorable event, with plenty of new memories to carry into the coming year.

Both roundtables were enlightening. A couple of standout sessions for me were: first-time speaker Kate Watson (PKG 101: Packaging for Abecedarians), who gave a superior presentation on how to approach the seemingly contradictory and complicated arena of packaging research, and A Fresh Look at Business Development, by Marta Villanueva and Cheryl Stella Dalisay, a reassuring reminder that many of us are in the same boat when it comes to the intimidating practice of getting new business. The Confessions of a Subcontractor, by Marilisa Beatty, also held a lot of useful “secrets” for another boat many of us find ourselves in, in increasing numbers and frequency.  Keynote was the impeccable Naomi Henderson, founder and CEO of RIVA.

Full disclosure: This year I attended fewer sessions due to running back to the hotel room for interviews on an ongoing project. A nice-to-have problem, I know!  Fortunately, QRCA makes the Powerpoint presentations available after the fact, making it pretty easy to check out info on the missed sessions — another one of those “they thought of everything” benefits of the conference.

As always, one of the highlights of the conference was reconnecting with colleagues and making new friends. From Phoenix 2018 to Savannah 2019, and a year of progress in between.

On January 20, we wrapped up the 2017 Qualitative Research Consultants Association (QRCA) annual conference, held at the J.W. Marriott L.A. Live in downtown Los Angeles.  The conference theme this year was The Power of Perspective.

Perspective aids empathy – a trait that we, as qualitative research consultants, rely on heavily in conducting our research.  At this year’s conference, a variety of perspectives were represented at the conference.  We heard from:

Mr. Forr illustrated the fluid, transient, and often unreliable nature of memory in an exercise where audience members were asked to draw the Apple logo from memory – an image all of us had seen thousands of times over the past decade or longer.  When the actual logo was revealed on the screen afterward, it turned out that almost no one got it precisely accurate, myself included.

One “memory sin” in particular stood out:  the sin of Transience (that our brains tend to mix up details as time passes, or “details mix as the clock ticks”).  Knowing that people are more likely to consider an overall experience to be negative if it ended badly or painfully than if it ended happily (or not painfully), we as Qualitative Researchers must factor this knowledge in when it comes to interpreting a consumer’s interaction with a product, or a user’s experience with a website.

Applied to website usability, for instance, this finding translates to mean that a “failed” task, or a task that consistently frustrates the user, will impact that user’s overall impression of (and likelihood to return to) that particular website, and may extend to the brand image overall, than had the user experienced an easy resolution of the task.

This finding may seem obvious in its impact on the need to conduct user testing with every consumer touchpoint for your brand.  But given how powerful a role memory plays within the context of the User Experience, its impact cannot be overstated.

This presentation, among many others, made the 2017 QRCA annual conference not only inspiring and insightful but (hotel fire alarms and torrential downpours notwithstanding) also a great way to reconnect with colleagues.

We are already looking forward to the 2018 conference.